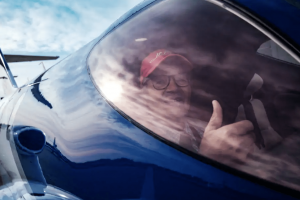 Climbing to 16,000 feet over the Virginia countryside Saturday, Charles McGee looked intense but at ease. From the co-pilot’s seat, he gazed at the horizon, the Potomac River to his left.

It was one day after his 99th birthday, 76 years after his first plane ride in Tuskegee, Ala., and decades since he served as a pioneering fighter pilot in World War II, after the U.S. government long held black people lacked the mental capacity to fly airplanes.

Now, with fellow Air Force veteran Glenn Gonzales in the pilot’s seat to his left, McGee put his hands on the yoke in front of him and began gently guiding the blue-and-white HondaJet through the morning sky, easing it a bit to the right, then to the left, getting a feel for the aircraft as Gonzales kept his fingers on the controls as well.

Before setting out for a day’s journey that was part epic birthday celebration, part reunion with machines he used to destroy stereotypes as much as enemy aircraft, McGee looked at a family portrait sitting above the fireplace at his brick home in Bethesda, Md.

There was his wife and eldest daughter, who hadn’t been able to join him at an air base in Kansas after he returned home — even after his wartime heroics — because housing remained segregated. And there were his two other beloved children, who have also lived their lives inspired by a man with standards and heart. 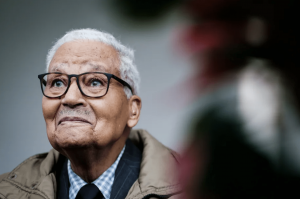 His son Ronald is a retired pilot for Continental and later United Airlines.

“He had a high school counselor who said he’d make a good truck driver,” McGee said. “So he went to college and got an aerospace engineering degree.”

Waiting a beat, he added: “Hopefully.”

McGee does not cede the controls easily, and promptly gave the Cadillac Escalade driver gentle instructions on how to drive.

Walking near the frigid runway, McGee, beaming, circled the corporate jet like he used to with the P-39 Cobras and P-51 Mustangs he flew over Italy; the later iteration of the Mustang he flew in the Korean War; and the reconnaissance jet he flew in Vietnam.

“Colonel, are you ready to go flying?” asked Vincent Mickens, an executive at the National Business Aviation Association, who came to know McGee when the group honored him and other Tuskegee Airmen. Mickens and Gonzales, founder and chief executive of Jet It, an executive jet timeshare firm, came up with the idea for the flight at lunch a couple weeks back.

“Am I ready to go flying? You got an airplane?” asked McGee.

By the tally of aviation watchers at the National Aviation Hall of Fame, McGee flew 409 combat missions, more than any other pilot with 100 or more missions in each of three conflicts. “If you’re scared, you’re in the wrong business flying,” McGee said.

Gonzales rolled out to the runway, and, showing off a little for one of his heroes, accelerated hard, lifting the plane off the ground remarkably swiftly and sending a badly stowed backpack sliding onto the floor of the elegantly appointed cabin.

Soon, the air traffic controllers tracking the HondaJet, tipped off by Gonzales, wished McGee happy birthday over the radio headset.

McGee was at the controls for the short hop to Virginia’s Hampton Roads area, where Gonzales buzzed the executive airport before banking back around and coming in for a smooth landing.

McGee gave Gonzales a thumbs up as the plane taxied past a windsock.

As McGee walked into the tiny terminal, Kendall, 12, and Kearston, 14, were already playing a lovely rendition of happy birthday on cello and violin. McGee threw his hands out to his side in delight.

“Those are my daughters, Colonel,” Gonzales said.

Surprises kept coming, along with the Virginia ham and biscuits and the Brunswick stew warming in a crockpot. Maj. Paul Lopez, an Air Force demonstration pilot for the F-22 Raptor, met to share experiences with McGee, as a procession of admirers continued to thank McGee for what he did for the United States.

“It’s unreal,” said Dianne Peele, an army casualty coordinator in the Iraq War who also served in Afghanistan. “He was interested in me, in what I do, and he’s the legend.”

“He got this look on his face as if he was proud of me like I’m proud of him,” Peele added. “It’s good to have that connection as veterans.”

Nothing, McGee likes to say, particularly not “the happenstance of birth,” should hold anyone back.

McGee loves flying with such depth it approaches the religious. To be able see the sunset from the sky, then “fly up to 45,000 feet and see the sunset again, and see the stars come out, we human beings are one aspect in a mighty grand universe.” 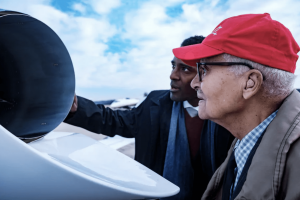 Then McGee interrupted himself, cutting into his own soaring thoughts after glimpsing a small yellow-and-blue plane through the window. “He’s taxiing out now!” he said.

Back outside, carefully into the co-pilot’s seat, and back up into the air, and McGee took a more active role guiding the jet back to Dulles, hands on the yoke’s horns for longer stretches, guiding the plane up by pulling back, then feeling it alter course under his power, the power he has spent a life appreciating from a place deep within.

“First time on a jet flown by a Tuskegee Airman. It doesn’t get any better than that,” said Eddie Kyle, 28, who works at the business aviation group.

Back on the ground at Dulles, two fire-engine water cannons sent streams arching over the returning plane. There was a double-decker birthday Bundt cake waiting. He got a piece for Jaia Henderson, 7.

They invited him to come back for another flight on his next birthday.