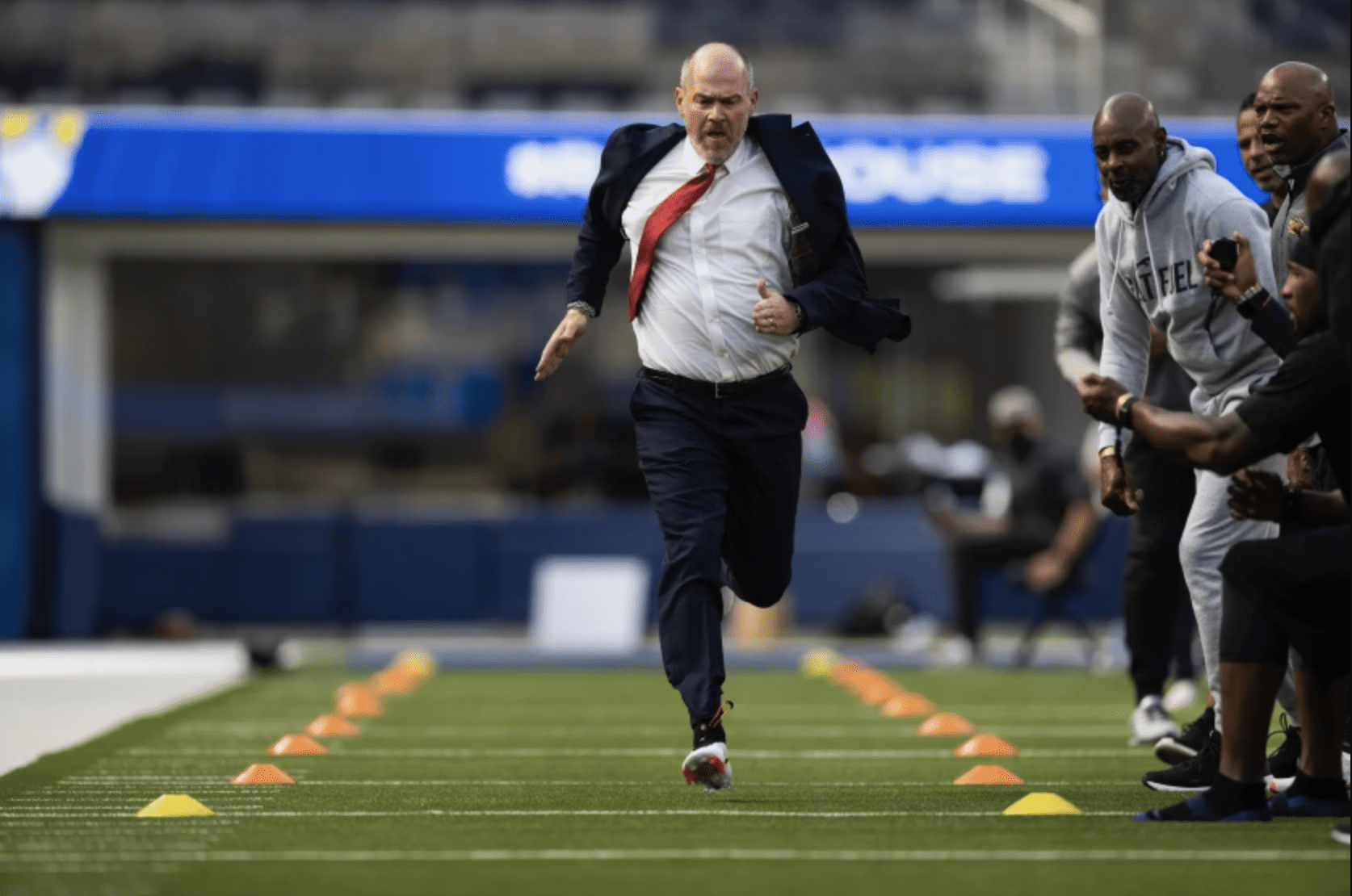 Rich Eisen had wingtips, but clearly no wings.

The NFL Network host’s first 40-yard dash came during a lull at the 2005 scouting combine, in the old RCA Dome in Indianapolis, and on a lark.

“Terrell Davis was sitting next to me, part of our crew,” Eisen recalled, referring to the Hall of Fame running back. “I looked down at the field, we had a 90-minute wait until we were taping. I turn to him, fully dressed and ready to do ‘Total Access,’ with a suit and tie, and say to him, ‘How fast do you think I can run?’ ”

Davis laughed, but the bespoke Eisen was serious. He left the set, walked down to the field, got into a stance that tested the fabric of his Italian suit, and chugged out a 40, just the way all the NFL prospects would do. Miraculously, he didn’t pull a muscle. Instead, he started an annual ritual.

Sixteen years later, Eisen’s “Run Rich Run” is a noteworthy date on the NFL calendar. Eisen, 51, has parlayed it into a philanthropic event, fielding thousands of videos of fans running 40s — including commissioner Roger Goodell barreling down a hallway at the NFL’s Park Avenue headquarters — and raising millions of dollars in donations to St. Jude’s Children’s Hospital.

“In 2015, we just decided to tell people to run their 40-yard dashes in their work clothes and upload the video to Twitter, and go to the website and donate,” said Eisen, host of “The Rich Eisen Show.” “We got a few thousand dollars that year, and it just kept growing and growing. It’s taken on a life of its own.”

Anna Isaacson, the NFL’s senior vice president of social responsibility, said in an email: “We are thrilled that Run Rich Run is happening again even during these unusual circumstances. Although the initiative looks different this year, what hasn’t changed is Rich’s unwavering commitment to St. Jude, one of our long-time partners. We salute Rich for bringing together the entire NFL family to help raise millions of dollars for St. Jude’s and the deserving children.”

This year, a twist. Because the combine was canceled amid the COVID-19 pandemic, “Run Rich Run” organizers had to find another time for the event. They staged it over the weekend at SoFi Stadium, when Rams season-ticket holders were touring the venue for the first time.

Although Eisen never has beaten the time of any player at the combine, he has improved his time since covering the distance in 6.77 seconds his first time. His fastest 40 was 5.94 in 2016, and he ran a 5.98 last year.

“To this day, whenever anybody’s the slowest at the combine, like a lineman runs the slowest of all the linemen, I get a text from [Hall of Fame defensive tackle] Warren Sapp that says, ‘That’s your pace car,’ ” he said. “I do not want to be the person that I ever beat.”

So the stadium that was supposed to open with a Taylor Swift concert instead lifted the curtain with someone tailored and surprisingly swift. 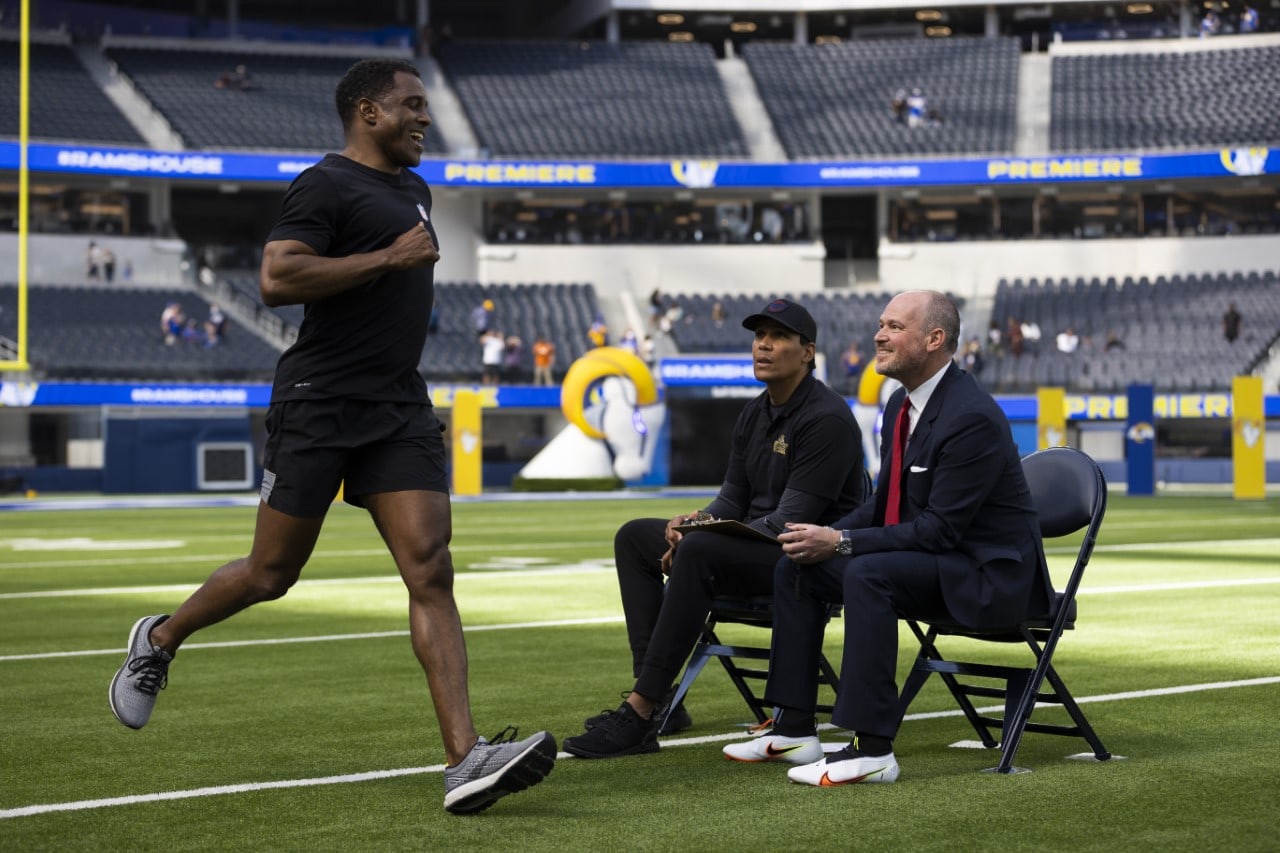 What’s more, those retired stars paired with eight high-profile entrepreneurs, who combined to donate more than $1 million to the cause: billionaire Marc Lore, the new co-owner of the Minnesota Timberwolves who helped devise the legends/donors idea, along with Brett Adcock, Vinit Bharara, Andy Dunn, Nate Faust, Jenny Fleiss, Glenn Gonzales and Jason Robins.

Eisen’s 40 will air during NFL Network’s coverage of Rounds 4-7 of the draft May 1 in Cleveland. Fans are encouraged to submit their 40-yard dash videos — or their interpretation of the concept — on social media using the hashtag #RunRichRun or #RunYour40.

“I’m very fortunate to do what I do for a living,” Eisen said. “I’ll never be jaded, ever. But when I crossed the finish line and I saw all those legends looking at me, it was incredible. As we were walking off the turf we said, ‘Next year we’re doing this. But we’re all training.’ ”