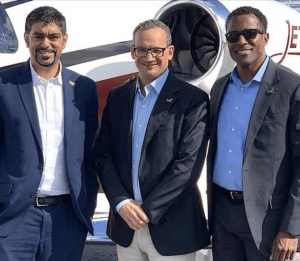 A Greensboro-based fractional ownership aviation company has captured the attention of Harvard University Business School as an example of business model innovation.

Jet It, which offers fractional ownership of HondaJet aircraft in North America as well as access to HondaJet planes in Europe and Southeast Asia through JetClub, was only a year into implementing its model at this time last year when founders Glenn Gonzales and Vishal Hiremath were approached by Harvard Professor Gary Pisano to perform a case study of the company.

At the time, Jet It had a fleet-only two planes but has since grown to eight with plans to double its fleet by the end of 2021. Gonzales and Hiremath are former sales executives of Greensboro-based Honda Aircraft Co. (NYSE: HMC), which manufactures the HondaJet.

Pisano and his team were working on a case study of Honda Aircraft when Jet It came to his attention. The Jet It case study was presented to the school’s executive MBA program in mid-September with plans to deliver it to the full MBA program in the spring.

“It was a fairly intrusive discussion in reference to how our business comes together, what we do and how are we doing it,” said Gonzales, who participated in the presentation at Harvard. “We took a number of our team members to Boston at this time a year ago. We shared a wealth of information, had numerous phone calls and meetings, I would say tens of hours of effort.”

Pisano’s case study of Honda Aircraft Co. concluded that it would require client companies with innovative business models to help make the manufacturer successful. That conclusion was drawn pre-Covid, prior to when the global aviation industry was nearly grounded and is slowly recovering. That provided well-positioned private aviation operators an opportunity to flourish, adding more relevance to the Jet It case study. 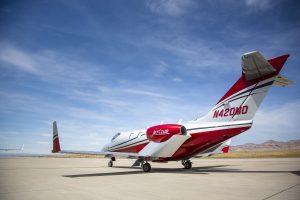 That both Gonzales and Hiremath interfaced with nearly every aspect of the private aviation industry as Honda Aircraft sales executives provided them with a distinct advantage. Both pilots themselves, Gonzales said their knowledge of the product and the education they received in the field from clients were key elements to developing their business model.

Jet It allows customers to purchase portions of a $6 million HondaJet in increments ranging from one-tenth to one-half, and to have access to the plane commensurate to their ownership share. The company’s JetClub model allows for the same opportunities in Europe, and membership access in Southeast Asia, where the regulatory environment is not favorable to fractional ownership.

When not in use by owners and members, the planes are made available for charter service, a direct revenue source for the company.

It’s a model that Harvard Business School deemed worthy of incorporating into its curriculum, and six new planes after the study began with big plans for growth, it is one that has thus far provided proof of viability.

“We’ve built a model based on the best practices for not just private aviation, but for travel in general,” Gonzales said. “We had to look at any and every option for travel. We were even prepared for this pandemic, because platforms like Zoom and Microsoft Teams are actually potential substitute goods or services for business travel. We explored as much as possible to make sure that we had a robust business model that could stand up against competition, and stand up against substitute services.”