Jo Koy is one of today’s premiere stand-up comics. In 2018 was given the “Stand-Up Comedian of the Year” at the Just for Laughs Comedy Festival in Montreal, Canada. His comedy is focused on his family, with many mentions of his millennial son, and regularly sells out arenas around the world. Across several years and venues, he has broken ticket-selling records, and recently became the only comedian to sell out over 30 shows in one year. Now, he has four highly rated comedy specials across Netflix and Comedy Central. He’s currently performing his Just Kidding World Tour with all new material, but if you can’t catch him in person, be sure to check out his specials for a fun night in.

To catch Jo Koy live, here are some upcoming dates and locations in June and July 2021.

Sebastian Maniscalco, Nobody Does This Tour 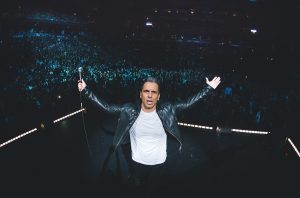 Jerry Seinfeld has dubbed Sebastian Maniscalco his favorite comedian. Maniscalco’s recent role in Green Book won Best Picture at the Academy Awards and he won Billboard’s “Comedian of the Year” in 2018. His latest five specials on Netflix, Showtime, and Comedy Central have reached new rating heights, prompting NBC to claim he’s “comedy’s new superstar.” Maniscalco has been performing stand-up for over 21 years now, and has slowly amassed a fan base “one joke at a time.” He is known for his physical style, not just telling a joke, but performing with his body language. His comedy focuses on his day-to-day observations and relatable family issues. Maniscalco says he keeps his stories loosely crafted  to bring his physicality and spontaneity into his work, telling stories with a little “flair.” If you can’t catch Sebastian Maniscalco live, you can check out his five comedy specials, or if you’re in the mood for drama, he’s featured in Martin Scorsese’s The Irishman and Peter Farrelly’s Green Book.

To catch Sebastian Maniscalco live, here are some upcoming dates and locations in June and July 2021.

Click here to view tickets for Sebastian Maniscalco’s Nobody Does This Tour.