Last year, I got approached by a company to help it amplify a contest it was running on social media. So we made a deal and I tweeted a bunch for the company, shot some videos, pretty standard promotional stuff that I have done for a number of companies over the years. It’s a great relationship and one that continues to this day. In the middle of last year, while working for the company on that contest, I met its owner, Glenn. I learned his story as a veteran of the Air Force. And I thought his story was awesome. It was a story I thought people should know.

The issue? I have a business relationship with the company — and I didn’t want there to be the appearance of any impropriety. Even if it’s innocent, as this is, I know how those things can appear. With Veterans Day being celebrated this week, I wanted to write about him, but I also wanted to be 100% upfront about everything before I do.

So with that out of the way, I’d like you to meet Lt. Col. Glenn Gonzales.

In the league we play in together, Glenn’s team is 5-4. It’s an undermanned team that has overachieved despite losing Dak Prescott for the year and being without Austin Ekeler for most of it. Dealing with injury after injury, Glenn’s team is littered with tons of “waiver-wire guys of the week” types, such as Jerick McKinnon, Cole Beasley, Boston Scott, Brandon Aiyuk and the recently acquired Duke Johnson. He has Jared Goff playing QB this week.

The team also has given up the most points, having had some really bad scheduling luck.

Most teams like this, with the injury issues and bad scheduling, have absolutely no business being 5-4 and still in the thick of it.

But most teams aren’t managed by Glenn Gonzales.

Born and raised in Houston, Glenn was an all-district point guard at Eisenhower High School, getting offers to play basketball at multiple schools, including the Air Force Academy. Glenn chose Air Force for two simple reasons. “It gave me a chance to do two things I really wanted to do: play Division I basketball and fly planes.”

Air Force didn’t win a ton of games while Glenn was there, but he played all four years, was a starter and was voted a team captain. Earning the school’s John Clune Award for leadership, Glenn was thinking big picture and about a lot more than just himself at a young age.

It was a quality that served him well in the Air Force, where, after school, he was stationed at Laughlin Air Force Base in Del Rio, Texas. His leadership skills were quickly noticed, and Glenn started training pilots on T-38s, pilots who would go on to fly fighters and bombers in the Air Force. Only the best in the class even get the opportunity to be trained on a T-38 Talon supersonic jet trainer. Glenn did that for four years, and over the course of those four years, Glenn said, 80% of the pilots he trained saw action overseas for our country, including in Afghanistan and Iraq.

But after four years, Uncle Sam decided it needed Glenn up in the air. Because, you see, as Glenn told me recently, “anyone can fly a plane, but using it as a weapon is another thing.”

I can’t even imagine … but that makes sense to me. It’s an incredible responsibility for someone to fly, say, an F-15C Eagle twin-engine, all-weather tactical fighter aircraft that obviously carries weapons. But that’s the responsibility Glenn was given.

To become fighter pilots, two squadrons train for five months at their fighter training unit. And at the end of each squadron’s training, two awards are given out: the distinguished graduate award and the “Top Gun” award, given to the pilot who has been identified as the best of the best in deploying aircraft as a weapon.

While stationed at Langley Air Force Base in Virginia, Glenn started doing what he has done his whole life. Prepping. Always prepping. Glenn would say to the pilots he led about missions, “If they come with [me], they are coming back.” And that doesn’t happen without incredible prep. 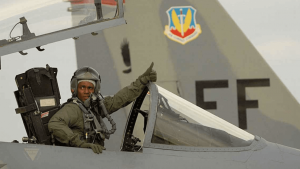 He deployed to Kyrgyzstan as part of Operation Enduring Freedom, and while there he missed his wife’s birthday, his daughter’s birthday … Glenn has lost count of how many holidays and family gatherings he has missed while in service. Considering he married Tanika, his college sweetheart (they’ve been married 19 years now), and they had two young daughters at the time (Kearston and Kendall, now 14 and 16), Glenn made a tough decision. In 2009, F-15C Flight Commander, 4-Ship Flight Lead and Lt. Col. Glenn Gonzales transitioned from active duty to Air Force Reserve.

He started his civilian career as a pilot for corporate America and was flying private jets for companies and potential clients when he was hired by Honda Aircraft Company as its regional sales manager for the Northeast, overseeing a 16-state territory.

It was while working for Honda Jet, as it is often called, going from state to state, airport to airport, talking with clients, companies and contacts, that Glenn noticed there was not a lot of diversity in the industry. As a Black man who had spent his life fighting for those who couldn’t, that spoke to him. As did the absurd cost of flying private aviation.

There had to be a better way, a more inclusive way and a cheaper way.

So he decided to start his own private jet company.

Look, starting any company is hard.

Starting a private aviation company is even harder, because, you know, planes ain’t cheap.

Starting a private aviation company when you have no experience running a company is even harder than that.

But most businesses aren’t started by Glenn Gonzales.

Like the point guard and team captain he was in college, like the flight lead he was in the Air Force, like the fierce-competitor fantasy manager he is in my league … Glenn Gonzales thought many moves ahead, drawing out a business plan just like he had done for so many missions in the F-15C Eagle.

He hit the road with a clear vision of what he wanted to build. He talked with investors. He talked with airports, with potential employees, with Honda Jet to see if it might sell him a jet if he could raise the money.

At the time, Glenn was unaware of any company in private aviation that was owned by a Black person. And Glenn’s plan involved charging three times less than other traditional private travel programs, while still maintaining the level of luxury that one would expect from flying on a private jet.

They thought he was crazy.

But when you’ve spent a good part of your life flying a fighter jet by yourself around the world into hostile areas with explosive weapons attached, you’re not scared of hearing no a few times.

Glenn scraped together enough to start his company in 2018 with just one plane and two employees. That was it. But it was a start. And a start was all he needed to make it work.

And despite a worldwide pandemic, Glenn has done just that.

By the end of 2020, Glenn’s company, Jet It, will have grown to a fleet of 11 airplanes, with another five on order. The two employees have grown to a workforce of 52. Glenn and Jet It have been featured in Forbes, on CNBC, on Fox Business and in many other places.

If that’s not an American success story, I don’t know what is.

If you’ve read me for any amount of time, you know I like to do a column the week of Veterans Day highlighting our military in some way. One of my great joys of this job is when I hear from so many servicemen and servicewomen who tell me how much fantasy football means to them. How it keeps them connected to friends and families back home or helps them keep in touch with their platoon once their active service has ended. How fantasy football provides an escape for military when they are stationed somewhere scary or for family members when they know loved ones are somewhere risking their lives for us.

How much joy and normalcy this silly little game brings them.

So whatever very, very small part I can play in helping that cause, it means a tremendous deal to me. It’s the very least I can do. With Veterans Day this past Wednesday, it seems the very least I can do: to thank these men, women and their families, all of whom have made more sacrifices than we have any right to expect from them. It’s our duty to recognize what they mean to us and our way of life.

I explained all of that to Glenn and asked if he would be willing to let me share his story this year, because I think it’s an awesome and inspiring one. Glenn is fairly reserved and not one to seek publicity personally, but when I told him it was for Veterans Day he agreed. 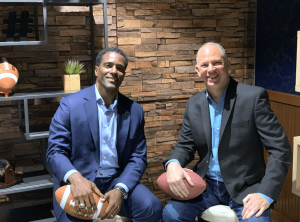 Even though Glenn has left active duty, service to our country still means an incredible amount to him. Of the 52 employees at Jet It, 18 of them have served in the military. Members of the Army, Navy, Marines, Coast Guard and, of course, Air Force are all represented.

Glenn wanted to do a Jet It fantasy football league because he believes it helps his company. “While it may seem silly to some, fantasy football is a way for our Jet It family to build camaraderie, another avenue for us to get to know each other better to help us with the mission at hand.” Glenn believes the keys to winning at fantasy football — preparation, strategy, effort and execution — are the same qualities that make everyone successful, be it in the military, a start-up business or even fake football.

“These are the elements,” he tells me, “that will help us be successful.”

I think you’re already there, Glenn.

I want to thank Glenn for his service, for allowing me to tell his story and to once again thank all the men, women and their families who have served, are serving or will serve our country in the future.

Your sacrifice is not lost on me, not for one second.