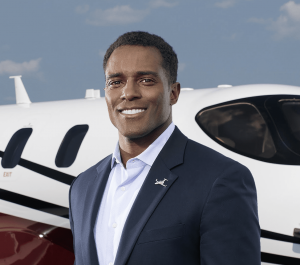 It’s a timeless adage among professional pilots: If you’ve not been furloughed, just wait; you will be. That the pink-slip experience is shared by so many, however, does not make it any easier on the pilot being cut, as Glenn Gonzales (pictured) will readily attest.

After a decade in the U.S. Air Force, the academy grad exchanged his G-suit and the tight confines of an F-15 for spacious opulence and leading-edge technology as a demonstration pilot for Gulfstream Aerospace. Ultimately, he would fly some of the most exquisite and pampered aircraft extant the world over—Moscow, Singapore, Macau and beyond. But before all that, and not long after being hired, he got axed. The unexpected furlough notice shocked the fighter pilot to the core.

Suddenly, he realized, “I had no control over my destiny.” That would change in time.

But first he was recalled to the Gulfstream flight line in Savannah, Georgia, and spent a total of five years demonstrating aircraft capability and answering questions from prospective buyers and operators. Turned out he liked that latter part a lot—so much so that he pursued and won a sales position with Honda Aircraft.

For Gonzales, the new job was a dual win. It demanded he rely on his own talents, both as a pitchman and pilot, since he got to fly new HondaJets to potential clients and learn the aircraft’s strengths firsthand. Now his destiny would be of his own doing.

With the Greensboro, North Carolina, manufacturer expanding its markets internationally, Gonzales suggested hiring Vishal Hiremath, a former Gulfstream colleague with sales experience in Asia and South America, and the company took that advice.

As Gonzales’ familiarity with the aircraft, the engineering behind it and its operators grew, an idea began to coalesce: Combine concepts proven by different operations and create a fractional ownership operation focused on regional service using a single model of aircraft, the HondaJet. He shared the idea with Hiremath, who not only saw its potential but also offered refinements for eventual international applications. The two found backing and in December 2018 officially launched Jet It, with one employee in addition to themselves.

Their sales proposition strayed from the established fractionals. First, a Jet It shareowner can use an aircraft for an entire day, involving multiple legs if desired, and can also reserve it for several days. Second, the operating cost is $1,600 per flight hour—period. Third, owners can buy a minimum 1/10th of a share for $630,000 or a maximum half-aircraft share for $3 million; those investments entitle them, respectively, to fly 25 or 130 days per year. And notably, fourth, a pilot-shareowner can earn a HondaJet type rating and take control of Jet It aircraft, albeit with a company captain in the other cockpit seat—and the per-hour charge is unchanged.

That package proved appealing, especially for people traveling regionally. On average, Jet It jets fly trips of 1.5-2 hr. with three or fewer passengers, whereas the HondaJet can accommodate six passengers and legs roughly double that time.

The company’s roster of owners, fleet aircraft and employees grew steadily. By its second anniversary, the company expected to have more than 50 employees and 10 or 11 HondaJets, with one each in Canada and California along with those on the East Coast of the U.S.

Moreover, the COVID-19 pandemic has seemed to spur, not slow, growth. Jet It’s sales in the second quarter of 2020 grew 300% compared with the previous year, not to mention a 400% jump in the fourth quarter, Gonzales says. He expects to close out 2020 with three times the revenue the company posted in 2019. Jet It offers idle aircraft for charter at $4,500 per flight hour, and that activity from March to September grew 40%.

To accommodate this exuberant reception, Jet It in October placed an order for 10 more HondaJet Elites, with deliveries paced through the end of 2021. This move makes it the largest operator of the type in North America. But it won’t be confined to that continent. JetClub, a sister company, plans to begin HondaJet fractional operations in Europe in 2021 and then expand, in some form, into Southeast Asia as well.

By the end of 2021, Gonzales believes Jet It and JetClub will have 20-25 HondaJets in service. He sees his company’s popularity as part of “the natural evolution of transportation” that was accelerated by the pandemic. Travelers have always embraced “autonomy and efficiency,” he says—exactly what Jet It provides while constituting “an inevitable shift” in travel options.