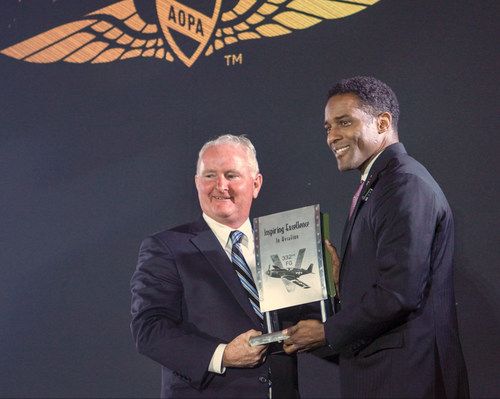 The Brigadier General Charles E. McGee Aviation Inspiration Award was presented to Glenn Gonzales, founder and CEO of Jet It, which leverages the innovative HondaJet to create a unique path to general aviation access for pilots and passengers.

Like McGee, Gonzales is a U.S. Air Force veteran who has used his military and aviation background to make a difference for others. In his own community, Gonzales founded a military community outreach organization, called The 71st Fighter Squadron Iron Foundation, and also served as a program coordinator for Special Olympics. He has inspired many local youth—and adults—through his words and deeds.

“As you know, America lost a true hero earlier this year in General McGee,” Baker said. “He was an inspiration and a true friend to the aviation world. True to his lifelong spirit, we are happy to recognize Glenn, who, like General McGee, persevered to overcome challenges en route to learning to fly—while inspiring others along the way.”